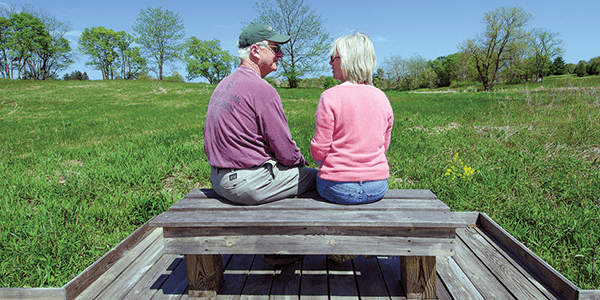 Robert and Jennifer Adams are a couple who had dedicated years to their respective careers, that of a research chemist and a community college teacher. They had planned to work for a good twenty years after college building their investment portfolio, gaining a modicum of security and setting themselves up to be able to slow down and enjoy life in the second half of their careers. They felt as if they had put many things on hold while getting advanced degrees and working many hours of overtime.

Now Robert had received a concerning medical report and found his priorities had suddenly shifted. Dollars cannot replace health, time or family love and he knew that he had to somehow regain the core values he had walked away from in the pursuit of wealth. Thankfully, Jennifer was supportive of his change of heart and, grateful that he was alive, was willing to take a step backwards and together re-examine their life goals.

One of the things that impacted them was the kindness showered upon them by strangers in the medical system. The hard working nurses there were so dedicated and helpful, trying to allay their fears and tell them success stories of others who had walked their path. As they moved through the halls of the hospital they saw wings with donor names and were powerfully impacted with the thought that here were people who gave their funds to research a cure for a disease rather than thinking about upgrading their oceanfront shore home. That selflessness stopped them in their tracks and opened their minds to what their "duty" might be in the light of eternal values.

Coming from a life that was wrapped up in their own daily activities, they knew they had to take the proper time to educate themselves about how to do this about-face. They were watching the stimulus talk in Washington and wondered how the best decision could be made so quickly and they didn't want to be put in that position too.

A logical starting place for them was their financial advisor. Luckily their advisor was personally inclined towards philanthropy and was well-versed in the various plans and techniques they might use. She suggested visiting with a professional at Univest Foundation, having heard about the number of people who had worked with them to design personal charitable plans.

Upon meeting with a trust officer at Univest Foundation, Robert and Jennifer learned about a Donor Advised Fund. To them this sounded like the perfect plan. They could make occasional gifts to a donor advised fund either whenever they wanted, or triggered by advice from their accountant. The best part was they didn't have to immediately decide where to give the funds. Especially in this economic climate, they wanted their gifts to be used in the most advantageous manner possible.

The end result is that Robert and Jennifer were able to receive a sizable charitable income tax deduction for the fair market value from gifted shares of stock from Robert's place of employment. The low cost basis he had for those shares made this a total win-win situation for him. Though they could take the income tax deduction this year, Robert and Jennifer could take their time researching and locating the charity or charities that could best use their gifts, making those gifts on their own time schedule.

Sometimes life gives a second chance. The Adams' felt that they were one of the lucky ones to be given that second chance, and they wanted to make the most of it. If you would like more information about setting up a Donor Advised Fund, please contact Univest Foundation at 215.721.8374.